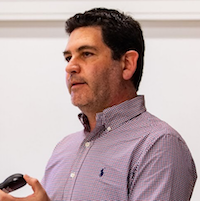 Professor
University of the Aegean

Demosthenes Vouyioukas is Professor at the Department of Information and Communication Systems Engineering, University of the Aegean, Greece, while he has also appointed as Director of the Computer and Communication Systems Laboratory. He served as Head of the Department of Information and Communication Systems Engineering (2019-2022) and Director of the MSc program “IoT: Intelligent Environments in Next-Generation Networks” (2018-2022). He received the five-year Diploma in Electrical and Computer Engineering (1996) and the Ph.D. degree (2003) in Electrical and Computer Engineering from the National Technical University of Athens (NTUA). He also received a Joint Engineering-Economics M.Sc. from NTUA (2004). From 1996 to 2003, he has been a scientific researcher, and from 2003 to 2005, a senior researcher at the Mobile Radiocommunications Laboratory of NTUA, where he worked on several European and National R&D projects. From 2005 to 2006, he was with Hellenic Aerospace Industry at the Department of Satellite Communications. In 2004, he joined University of the Aegean as an adjunct lecturer (2004-2010), an Assistant Professor (2010-2016) and an Associate Professor (2016-2020), where he also serves as a scientific coordinator in several R&D projects. In November 2021 he appointed as deputy member of the plenary of the Hellenic Data Protection Authority, where in the past he has also served as a deputy member of the plenary of the Hellenic Authority for Communication Security and Privacy (2012-2019).

He teaches undergraduate and postgraduate courses and his current research interests include mobile and wireless communication systems, channel characterization and propagation models, machine learning techniques for pathloss prediction, performance modeling of wireless networks, cooperative wideband systems with relays, UWB indoor localization techniques, UAV and aerial communications, next generation mobile and satellite networks, MIMO and 5G and beyond/6G technologies, network security and privacy policies. He has published over 130 papers in scientific journals, books, book chapters and international conference proceedings. He is a Senior Member of IEEE and member of IEEE Communication Society of the Greek Section, a member of IFIP and ACM and a member of the Technical Chamber of Greece. He also serves as an Associate Editor of Telecommunication Systems Journal, Springer, Guest Editor of International Journal of Antennas and Propagation, Hindawi, and TPC member in several international conferences. He is a General Chair and Organizer of the International Summer School “Emerging Architectures and Key Technologies for 5G Networks”.